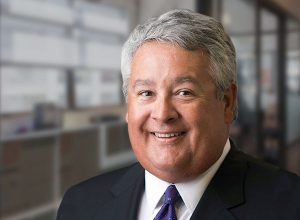 Mark G. Contreras is a seasoned chief executive officer with more than 35 years leading media companies across the United States.

He currently serves as President, Chief Executive Officer and Trustee of Connecticut Public Broadcasting, the NPR and PBS affiliate in Connecticut.

Prior to this role, he served as Dean of the School of Communications at Quinnipiac University, a leading media program focused on journalism, film and television, public relations and design.

Contreras led Calkins Media Inc, a privately-held television, digital and newspaper company with assets throughout the Eastern and Southern United States. Calkins became one of the leaders in helping newspapers add video storytelling to their suite of offerings and later became one of the first local media companies to develop OTT apps for Roku, Amazon Fire and AppleTV.

He joined Calkins after serving as the head of the newspaper business for the E.W. Scripps Company with full P&L responsibility for the newspaper and digital properties located on the East Coast, Midwest, South and West Coast of the United States. The Scripps newspaper group was the 10th largest newspaper company in the US and was based in Cincinnati, Ohio.

Prior to that he served as Senior Vice President of Pulitzer Inc based in St. Louis, Missouri. He had full P&L responsibilities for the properties outside of St. Louis and completed more than 20 acquisitions.

He served for nearly 5 years as the President and Publisher of The Times Leader, a daily newspaper and digital company based in Wilkes-Barre, Pennsylvania. Contreras led the organization during three ownership changes within two years prior to assuming the responsibilities at Pulitzer.

He served for many years in a variety of commercial roles for Capital Cities / ABC, Inc in Pontiac, Michigan; Kansas City, Missouri; and Wilkes-Barre, Pennsylvania.

Contreras served as the Chairman of the Newspaper Association of America and The American Press Institute.

He is a Henry Crown Fellow of the Aspen Institute and has an A.B. in History from The University of Chicago and an MBA from The Harvard Business School.

He currently serves on the Board of Directors of GFR Media in San Juan, Puerto Rico and Woodward Communications in Dubuque, Iowa.

He has served on more than 20 non-profit boards of director as Chairman, Committee Chair or Board Member.