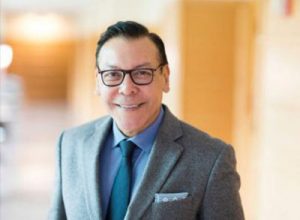 Felix Sanchez is a principal with Terra Strategies LLC, a government affairs and public relations firm in Washington, D.C. Sanchez is also the pro bono chairman of the National Hispanic Foundation for the Arts (NHFA), which he co-founded in 1997 with actors Jimmy Smits, Sonia Braga, Esai Morales and Merel Julia. The nonprofit foundation has become a leader in promoting Latinos in the media, entertainment and telecommunications industries.

For the past several years, Sanchez, as NHFA chairman, led the fight to desegregate the Kennedy Center Honors, which resulted in major administrative and personnel changes at the Kennedy Center, and yielded the following Latino honorees in 2013: Carlos Santana and Martina Arroyo; in 2015: Rita Moreno; and in 2017: Gloria Estefan. Sanchez’s efforts, on behalf of NHFA, led to the induction of 22 new Latino members into the Association of Motion Pictures Arts and Sciences (Oscars).